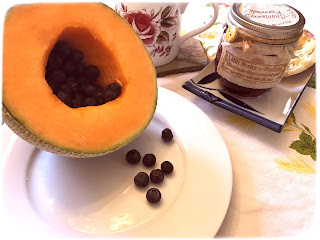 An English muffin and my homemade cranberry marmalade.

The coffee mug with roses and forget-me-nots painted between the leafy pattern swirling the mug. It's gift, the mug.

I sip from the roses and forget-me-nots, and also from this Living Water just pooled on the pages of my Bible.

I chew the muffin and taste the marmalade sweet with a hint of cinnamon and cloves and apple; and also taste the sweet with subtle hints of spice which is this Bread and this taste-the-sweet-Word-of-God kind of spice-God's Word.

The Word of God isn't bland.

It's not sickly sweet.

It's breakfast in the morning.

Between bites, I ask God, "What have You given me which is precious to You?"

I've been reading the parable of the talents in Matthew 25, "The kingdom of heaven is like a man traveling to a far country, who called his own servants and delivered his goods to them."

The Son of Man is coming. He is! And when He comes? Well, He tells about that, too. "When the Son of Man comes in His glory...He will set the sheep on His right hand, but the goats on the left." 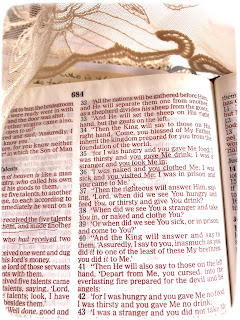 I wonder, the two servants who are invited by their master in the parable to enter into his joy, are they the likes of the sheep which Jesus is talking about? And the servant who was called wicked and lazy, would that servant be as goat? I think so.

Seems His servants will be separated according to what they've done with His goods, and seems also that none will enter His joy because they've done all the right things. Works alone are as blueberries rolling around on a plate. Faith without works is as hollowed out empty cantaloupe.

One supports the other, and the other fills the one. When faith and works come together, they prove one another as tart cranberries and bitter orange zest in the same pot with grated sweet apple and a bite of cinnamon and clove in a rolling boil prove the best marmalade you'll ever taste. 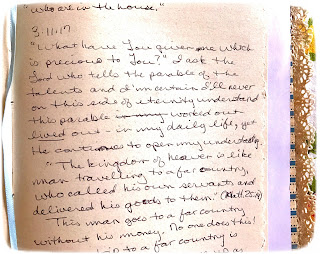 "What have You given me which is precious to You?"

It's right here on the page I'm sipping from. He's given the hungry, thirsty, naked, sick, imprisoned, foreigner, lonely. These are His precious.

These are to Him what the talents were to the master in the parable.

These are given to His servants to feed, give cold water to, clothe, comfort, heal, visit, treat with respect, welcome, and keep company.

Maybe it's mystery that when His servants do these things, they do it unto Him; but it's not so mysterious in the doing of it. Seems the mystery unfolds as it's being done. Seems He gives what is precious to Him, and then gives more-the desire to respond.

This is entrance into His joy even before He returns.

It can't be helped.

Enter His joy by entering His joy.

Place all ingredients in a pan on medium heat. Bring to a low rolling boil for about 15 minutes.

Stir often to check for thickening. If the cranberries haven't all popped and it's getting too thick, add water or orange juice. You may also mash the unpopped berries.

Posted by Carolyn-Elizabeth Roehrig at 9:45 PM