Stop and Listen and Let the World Be Big

King on conquest, He flexes the atmosphere into the shape of a warrior's bow, draws the arrow from the quiver, pulls taught some electrical current still vibrating the bass riff echoing over itself from the last arrow that flew and strummed the sky like a rock star on electric guitar. He packs a storm on His back and means to smash every line of power daring to hum incessant nonsense till the ears of His people ring too loudly to hear the line of praise He created and tuned for the sake of His name.

Sometimes He rides on the clouds; just kicks them up till mid-day sun is cloaked in black and maybe it's thunder I hear, or maybe the rolling wheels of the chariot He commands, but it shakes the glass in my window panes, knocks the power right off the grid; just slaps the hum silent. 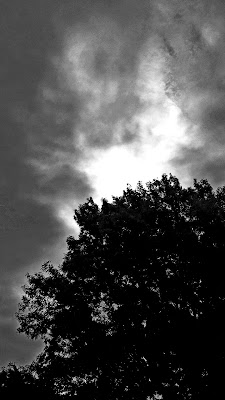 Something beeps from the garage and the lights flicker off, the air conditioner stops breathing and the computer fails, dumb and lame. Yeah, that's the best part. When the computer stops running. Stops the world-bent-wide searches in response to the commands given by my own bent fingertips at keyboard. When the computer looses power, I feel that somehow I've gained some power.

When the power fails, I can't help think that the truth about the power which we human beings have to make the word small and accessible is maybe this-if making the world seem small is what the buzz is all about, then we are small indeed.

I feel empowered to stop and to listen and to let the world be big.

A big God made a big world.

"I am the Lord," He declares from the heights, "and there is no other; there is no God beside Me."

He continues, "I am the Lord, and there is no other; I form the light and create darkness, I make peace and create calamity; I, the Lord, do all these things" (Isaiah 45:5-8).

One calamitous strike of lightening power from the heavens above, and the power which lulls my ears with its incessant hum, stops. Keep me going at all cost, it hums. I'm worth millions!

"Indeed," I nearly hear Him say. "My hand has laid the foundation of the earth, and My right hand has stretched out the heavens; when I call to them, they stand up together!" He does say it in Isaiah 48:13.

Indeed. And when He draws a lightening rod from His backpack and fires it, entire power transformers crash.

A mid-day storm and the sun is covered, the sky is darkened, the white peace-clouds are dispersed. What disperses them? Surely this "I make peace and create calamity" fearsome side of God who tells me that He forms the fluffy white peace-clouds and sets them sailing on a summer breeze like masted boats on a sky blue sea, just as He also creates calamity.

One God-sized breath and seas and sky and white clouds and sails on boats churn.

It could be my imagination, but I think that I begin to hear more clearly and feel more bravely the mysterious power which surges from God's fingertips when the other power-the hummy buzz-fails. 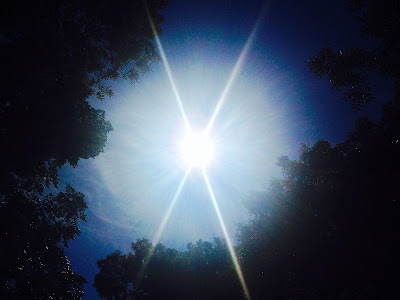 I like a power outage. When the power's out, when the white noise stops humming like elevator music, I can hear better. Deeper. And if the power's out long enough, I can feel myself unwind inside where I didn't know I was wound tight as wire.

When the power's out, I can hear myself think things such as, "I  don't want the world at my fingertips." This is a progressive thought. It begins, "I don't need the web," and deepens as I sense a greater power-the kind which calls up and down earth and heaven till they stand up together. "I don't need," stands up tall, "I don't want!" And, for as long as this outage lasts, I don't want. Oh, if it gets dire enough, I'll want again. I will. I'm no pioneer woman. But for now? I'm feeling it.

What I want, and need, is to stand up at God's call and to know this-His power-which will never demand payment from me, but has given me all that He asks from me. That's power.

"Lord, I have labored to give what you have already given!" The thought isn't brand new, but it surges with Spirit popping, "Aha!" right about now.

I continue, "I've labored in vain to pay what You've already paid!" Then I simply read straight off the page of Scripture opened before me, "Lord, I have labored in vain" (Isaiah 49:4). Leave it to a prophet to get at the heart matter-the truth-in less than ten words.

I read these six words out loud, "Lord, I have labored in vain." I read them and realize that they don't sound like confession to be ashamed of.

"Lord! I'm in good company! Your very own Isaiah said these words first!" Sure, I wish I've never labored in vain; wish the confession wasn't true, yet here it is and here is the next verse, "Yet surely my just reward," I pause here.

My just reward, I think to myself, not my punishment! My spirit hums full of His power in this outage, "My just reward is with the Lord, and my work with my God."

He reminds me of what He said back a chapter, in Isaiah 48:11, "For My own sake, for My own sake, I will do it; for how should My name be profaned I will not give My glory to another."

"You redeem for Your own sake?!" My mouth hangs opens; but His mouth? He says that His mouth is like a sharp sword, aimed for His own sake. "May I say, Lord, that right now Your mouth is as an arrow of lightening aimed for Your sake? For the power of Your glory to be known, felt, above all other powers that glory?" 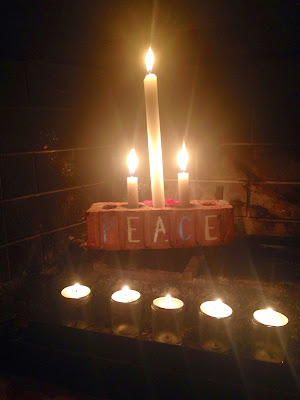 Over four hours have passed since the power went out. Candle flame, fire power, cuts the darkening shadows in my living room. I eat a bowl of stove-top dinner. The stove-top works. It's gas.

Six hours. I start getting ready for bed.

Eight hours. It's about 90 degrees in the house.

Twelve hours. The ceiling fan begins to hum. Something beeps in the garage. The air conditioner gasps like it's been holding it's breath too long.

My husband, the giant German who sweats in the snow, checked himself into a hotel long ago, so I get up and turn off stray lights.

My soul is still quiet, though the power is back on. I know I'll be wound up and wired in tomorrow, so I retreat to my knees now.

"You are King of power, packing a storm on Your back. You bend the heavens to bow. You pull taut the currents in the atmosphere. You reach Your hand over Your head to draw forth arrow from quiver. You aim Your word to silence every line but the lines sung by the heavens and the earth and the mountains, praising, 'Sing, O heavens! Be joyful earth! And break out in singing, O mountains!'"

I sing a praise that just rises in me from Psalm 148.


somehow when the computer
Posted by Carolyn-Elizabeth Roehrig at 8:53 PM No comments: