Sanguine In The Spirit-and other gifts

She'll never be green! She'll never be a string bean!  I open a can of green beans and dish out half the amount of dog food as usual. Yeah, yellow dog is on a green bean diet! She's sanguine. Her life is a bowl of cherries. Green beans in her dish are not the pits, and sometimes I wish  my family was this easy to feed.
"Whats for dinner?" They'd ask.
"Green beans!" I'd reply.
And they'd just grin.
Well, maybe sometimes I wish that I was that easy to feed, too.
Once upon a time, in a land far away, lived a missionary couple. I don't remember the name of the land they lived in, and I don't remember their names, and I don't even remember the details of their story except that they ate beets.They didn't chose to eat beets, but they had no food and, after they asked God for food, a local farmer of someone like that -I don't remember-felt he wanted to donate his extra beets to the couple.

Gratefully they ate them.

When the beets were eaten, someone else in the village felt they wanted to bring food to the couple, and they brought beets. When the beets were gone? More beets. I imagine they could have written a cookbook, 100 Ways to Cook Beets, sold copies to the local beet farmers, and used the proceeds to buy, I don't know, maybe green beans?

My husband, a big German who is to me, my giant German; he and I read the Janet and Geoff Benge missionary biographies to our four youngsters, including the one about the beet couple, and now I wonder if they whispered with concern, "I hope mom doesn't make us eat beets like that," to one another from their beds. They needn't have feared. My giant German isn't a beet guy. Neither were these missionaries, but  they were rather sanguine in the Spirit about it.

Sanguine in the Spirit. That's got a nice sound to it. 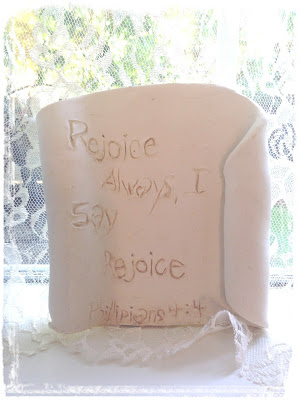 "Rejoice in the Lord always. Again I will say, rejoice!" (Philippians 4:4)

My daughter crafted this in her earliest years and gave it to me as a birthday gift. It leans here, against the kitchen window on the sill above the sink, and has cheered me through many kitchen messes this side of the pane, and through many seasons that side of the pane.

Rejoice! Rejoice! It's engraved in the sculpting clay-and in sculpted clay.

I'm sculpted clay. Rejoice! is a holy word engraved in my heart by the Holy Potter who formed me.

I'm barefoot clay, standing on plainest kitchen tile, choosing to be sanguine in the Spirit. I don't always remember that I have this choice, but this gift of clay gracing the sill with Rejoice! carved by toothpick in child-script reminds me.

I'm clay who must be cheered-Rejoice! Rejoice!-while I sculpt salads nearly every evening, and carve through casseroles, and whole chickens, and loaves of un-sliced bread, and through days.

I'm clay at the wooding cutting board that my eldest once burned a cross into and gave to me as a gift. He also used his wood burning kit to create a plaque with, Try to see beyond that which is of this world written on it. It hangs over the mirror by the front door, but maybe I'll move it to sill beside Rejoice. 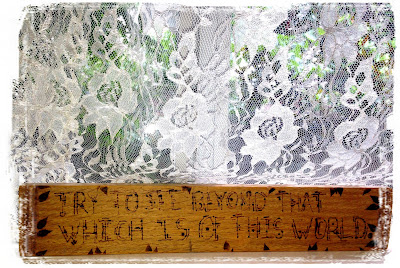 Maybe those sanguine in the Spirit practice looking beyond what they can see-beyond the beets.

Gently, I take the sculpted clay-the Rejoice-in my hand and wipe it down with a paper towel.

I know that "Be anxious for nothing," is what follows "Rejoice in the Lord always. Again I will say, rejoice!" I know that the verse continues, "but in everything...let your requests be made known to God." There isn't a period at the end of this verse, but I need one there. I do! Everything?

God hears my unspoken; my amazement. "Everything," He confirms. 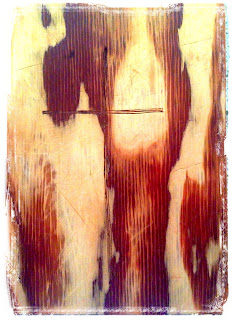 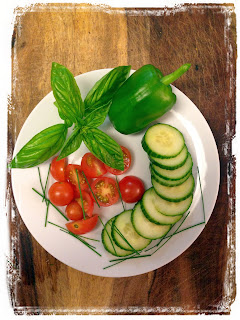 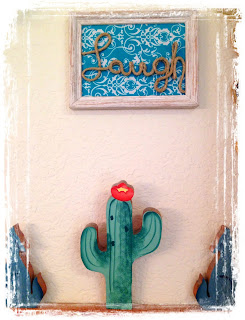 If my spirit had a waist, I'd tie laughter around it and wear joy as an apron and count everything, even every stain, as joy.

"Laugh." That's what's scripted in twine, glued to fabric, and framed in driftwood. It hangs on the wall just there, above the wooden cut-outs of coyotes and cacti which guard the three aprons gathered on pegs.

The apron my mother sewed drapes beside the apron given by my daughter-in-law who called me "Mom" before she married my son. MOM is embroidered across the bib of that one. The quilted apron sent from Alaska tucks too warm for Texas in the summer. I'll tie it about my waist when tile is cold on my feet and ice ticks against the window pane.

I choose the apron my mother sewed; and I choose to be sanguine in the Spirit no matter what splatters saucy. Or not.

Sometimes what splatters is just laughter. Sometimes what's saucy is just this giant German of mine who grins a quick dance out of me till I splatter laughter and tears at the same time because sometimes love is messy like that.

Sometimes love, the kind that begins as a bushel of red beets worth rejoicing over, continues through a few more bushels that are laughed about because, "Hey! God must have a sense of humor to keep giving us the same ol' red beets! till it's not funny anymore and, "Alright already! Enough! Give me something different," is the kind of love which is sculpted by most everything that's routine, expected, not always wanted, but rejoiced over anyway.

This lil' bit of clay? And that clumpy giant German? Yeah, we've eaten the likes of a lot of bushels of beets together till canned green beans sound like a delicacy just because they're not beets!

I wonder when yellow therapy dog will refuse the green beans in her dish.

Posted by Carolyn-Elizabeth Roehrig at 1:54 PM No comments: