A sister shared, "I don't like who I've become." Another put it, "I feel like I lost myself somewhere between babies and retirement." And still another, "I'm so distracted I can barely hold a thought down long enough to write a sentence!" And I wonder why the epidemic? At least it seems epidemic, lately-soul ailment.

I've said it before, in the midst of pain. And I've wondered at the face I recognize in the mirror as my own when it doesn't look like what I'm feeling inside-and also when it does.

There have been times when I would have just declared myself an orphan of my own guardianship-gladly.

Well, somewhere along the way I found that I'm a miserable guardian of my own soul. I am. All I have to do is look at what my actions, words, countenance reflect on bad days to know it's true.

So, it's true. Why doesn't it feel as bad as it sounds? I've wondered about this, too. 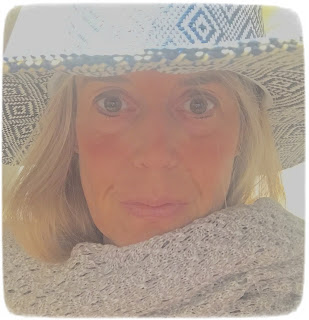 And I wonder it now because I'd like to say to these sisters, "You are wonderfully made in the image of God!"


And then I'd like to say, "So, you don't like what you see in the mirror? You're looking in the wrong mirror."


And then? I'd put a Bible in their hands and say, "See what you look like in the reflection of God's eyes."


The eyes of God are all the mirror I need. Or want.


If I look deep and long enough to find the face of my soul reflected in the light of His eyes, then I must agree with what's there.


A mysterious reflection, that's what.


A resemblance of me-enough to know it's me-and an image the likes of which I only believe because it's in God's eyes.


The first time I saw it, this mysterious reflection, I wrote "Grace" on the frame of the mirror-in the margin of the scripture, "Likewise you also, reckon yourselves to be dead indeed to sin, but alive to God in Christ Jesus."


And then I wrote, "Reckon it even if it doesn't look like it."


Maybe His eyes are, to me, a reckoning mirror. 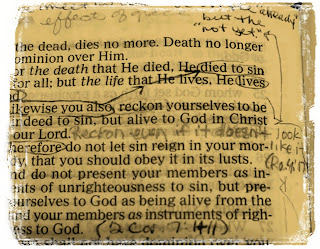 
I kept reading as a woman dying to know life; and as a child born to be adopted and as an ailing soul.


I found that what I really wanted, no, needed, is a guardian who loves me more than I possibly can.


The Spirit of adoption, that's who.


"Look at Me," He says; and then He holds my eyes to the reckoning mirror, "I made My begotten Son who knew no sin to be sin for you, that you might become My righteousness in Him."


I want to look away, but He holds my eyes and continues, "You received the Spirit of adoption by whom you cry out, 'Abba, Father.'"


Well, now I don't want to look away! Still, "Hold my eyes steady on Yours, Father," because I know that if I blink, I surely will look away.


Thing is, I can't deny what His eyes witness. 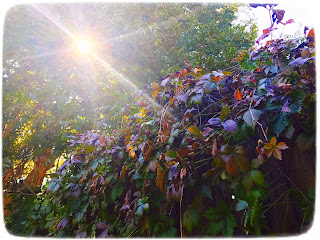 
Boston Ivy drapes her tresses a little thinned out, a lot colored in all dark shades of red, worn-out greens, browns and I half expect to see some gray beneath the tendrils lifted in windy toss. It's because this ivy and me, we're okay in our autumn do's. We're okay with the color changes, she with hers and me with mine all shades brown to blonde to gray because I'm a brunette who's lived in the sun long enough to be half blond and, yeah, gray too.


"Father," I tuck loose strands of hair behind my ear and feel His eyes hold my soul still.


Right now, in the slant of autumn, the only thing that matters about me is whose child I am.


I'm done being my own guardian.


Pecan leaves twirl the air yellow. They're okay, too, as they nearly spring right off the branches with no seeming regrets about the good ol' days because, guess what? The best days weren't when they were bound in green too immature to be beautiful in unbound liberty. No, the best days are the I'm free to fall because the truth about me isn't about me, days.


Well, isn't this wonderful? I think it is, because in this freedom there's true grace-the kind which is full of the life from Whom it comes. Any other grace is an empty shell. 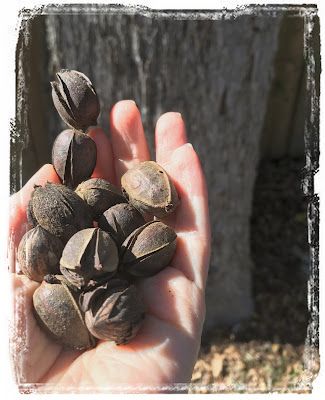 
I gather a handful of pecans. Oh, there's a tree load ready to fall. 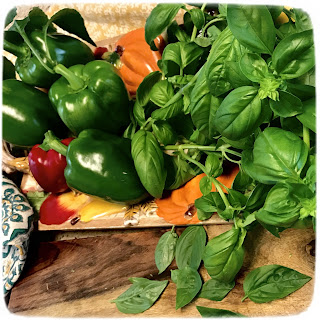 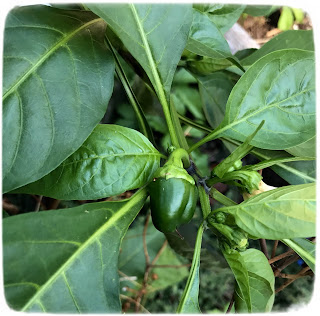 
I snip a bundle of basil and snap five more bell peppers from the plant. And there are more to come, while the ivy fades a few paces away.


I, who have suffered myself my sisters have themselves, choose to spend my time gathering pecans meaty full and calling them a testament of true grace. No excuses; no empty shells.


There are days when I don't exactly like myself, but so what? I choose to look unblinking into the reckoning mirror.


I choose to see what my Father witnesses just there.


Posted by Carolyn-Elizabeth Roehrig at 8:37 PM