Shot by the Pillsbury Dough Boy

Pigs in a blanket and applesauce. I'd wrap them Lil' Smokies in crescent roll dough straight from the cylindrical canister every now and then, and I'd wonder how these ingredients got into my shopping cart. Prob'ly by accident, on account of 'cause two accident prone little boys were in my shopping cart, too.

The same boys who "accidentally" chewed toast into pistols and had a shoot-out across the breakfast table.

There were other "accidents" too, and many of them were blamed on the mysterious "Nobody." Once Nobody tried to swing from the shower curtain and somebody,  the likes of me, catapulted herself upstairs in hopes of catching Nobody in the act. 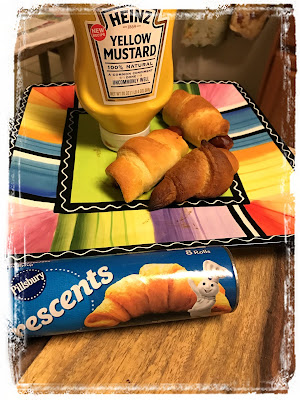 I've never cared to eat the other white meat, and while I've never ground wheat in a denim skirt and combat boots, I'm flat out too health conscious to have developed much of a relationship with the Pillsbury dough boy.

Maybe that's why he shot me.

Just this evening with the metal lid to the crescent roll canister.

The lid shot off the mouth of the canister, and maybe the dough boy would  claim it was what's called an "accidental discharge," but that canister was loaded with dough, aimed at me, and I have no idea how that kind of pressure builds inside crescent roll packaging,  but I'll tell you it's a little startling to be shot in the backside bent over an oven rack while checking the Beef in a Blanket.

Yet graphically a tad familiar. Familiar. Is this word related to another word-family? Immediate family, extended family, brothers and sisters familiar by Christ, and the human race family? 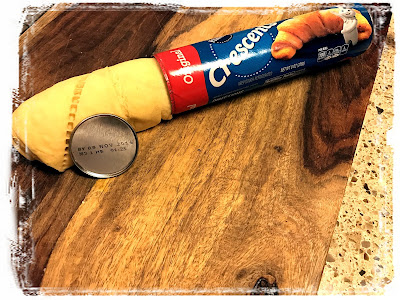 The lid shot off the canister, half the dough rifled with it, and I know I've seen this somewhere else before. It's startling when you get shot in the back by a trusted family member, isn't it? Isn't it startling when what's been building inside a friend or coworker, a fellow Christian or a complete stranger pops a lid, shoots off the mouth, and you get to see what comes out?

I looked at spilt dough on counter top and, "As we think in our hearts," came the verse, "so we are." It's written somewhere in Proverbs 23. I remember because "23" rhymes with "so are we." I know, but it works.

I take a picture, and my daughter looks at me like, "Really, mom?"

Then I reach for my Bible. I want to know where the other things about what comes out of the heart are written-where it's written what just can't help but flow with the power of joy building behind it in the canister of my being. My heart, which holds what's put in it.

"He who believes in Christ, as the Scripture has said, out of his heart rivers of living water" (John7:37).

And rivers of expanding dough, I think to myself.

Thing is, if it's not something like holy joy, or kindness, or wisdom all rolled up in my heart and just waiting for the moment to flow out on the current of love, then I don't want it filling my heart. No sticky Pillsbury crescent roll dough, thank you. I don't want processed, pre-cut, packaged anything filling my heart. Just flowing river sweet water of life, please.

I know only one way for this to happen. It's called transformation by the renewing of my mind.

It's called pray without ceasing and give thanks in all things.

It's called repay no one evil for evil, but have regard for good things, family.

It's called if it is possible, as much as depends on you, live peaceably with all men; and isn't it also called, love your neighbor, for love is the fulfillment of the law, and maybe it's also called, let's stop thinking of ourselves as victims.

Here's a thought. There might not be any lawyers if we loved our neighbors, and if we overcame evil with good, and if we weren't so ready to avenge ourselves but really trusted God when He said "vengeance is mine, I will repay." Perhaps this is the strongest defense we have against feeling victimized. Guaranteed God's not going to go off at the mouth as many of His children who call Him Father might do. 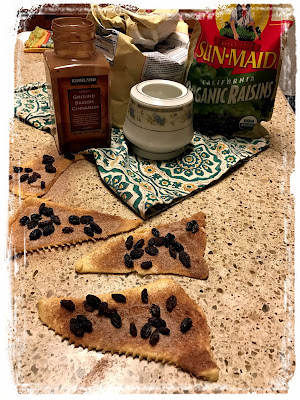 I pick up the canister lid from the floor, step over the dog who's licking the floor where the lid landed, and I unroll the spilt dough.

"What do I do with it, Lord?" I'm really not asking Him what to do with the dough, but, "What do I do when someone in this family called humanity is ready to explode and I'm in the line of fire?"

"Make cinnamon rolls." I don't know if that was God or subliminally prompted by the scrumptious photo a friend of mine posted the other day and wrote, "Cinnamon rolls last about five minutes in our family."

He says, "Make cinnamon rolls," and I hear, "Sugar and spice and everything nice-extend grace."

Grace. Isn't that a family trait for those who are brothers and sisters in Christ? It is. Grace is family trait.

Is it always given? I wish I could say that it was, but it's not. Yet, none of that changes the fact that grace is a family trait and I don't want to be a traitor to it.

Adopt a victim mentality, and be a traitor to grace. Seems to me that's the way it works.

So, I butter up the exploded dough, subdue the precut triangles with sprinkled cinnamon-sugar and raisins, bend over the oven rack once more and look forward to breakfast in the morning.

Coffee and a cinnamon roll on a cool fall morning. Yeah, that's what I do with what shot from the mouth of the crescent roll canister.

I choose not to be victimized.

I choose to make cinnamon rolls.

Posted by Carolyn-Elizabeth Roehrig at 5:41 PM No comments: